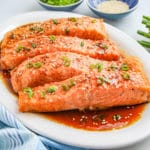 Use an instant read thermometer to prevent overcooking. Salmon is considered medium rare to medium at 130-130 degrees. Salmon is well done at 145 degrees. At this temperature the fish will be firm and should flake easily when tested with a fork.

Don’t overcrowd the skillet while cooking. Be sure to leave some space between the fillets to allow for an even heat distribution and even cooking.

Store leftover fish and sauce in separate airtight containers for up to two days in the refrigerator. Reheat fish in a non-stick skillet over medium heat until desired warmness. Pour sauce over fish and baste fish with sauce for about 30 seconds.

Nutritional information is estimated. Information will vary based on ingredient choices and serving sizes.